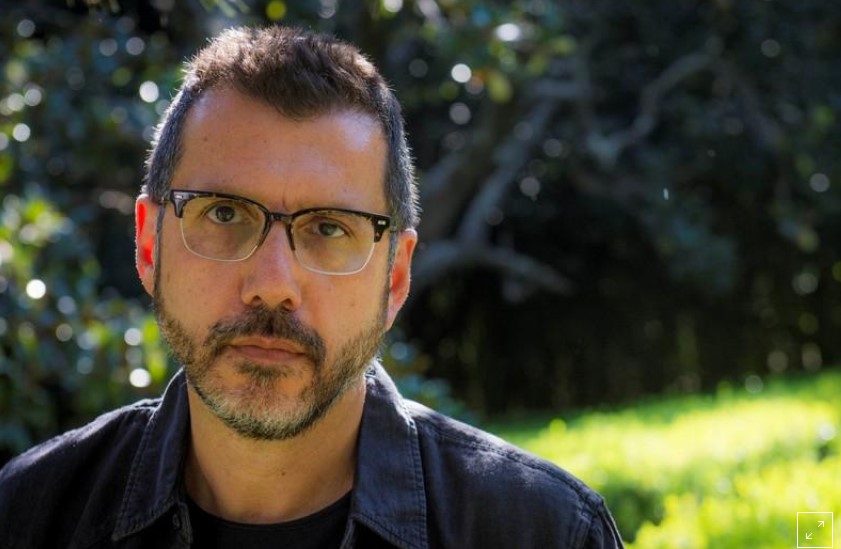 Chilean filmmaker and writer Alberto Fuguet poses for a photo after an interview in Buenos Aires, Argentina, March 14, 2019. Carlos Furman/Subsecretary of Culture of San Isidro/
Fuguet, who in the 1990s edited the McOndo anthology in reaction to the magical realism in Latin American literature with a more pop, urban and contemporary bet, wrote several books, including “Mala Onda” and “Tinta Roja”, and directed more than a dozen films, two of which will premiere in April.

One of them, entitled “Siempre Sí” (Always Yes), will premiere worldwide on April 19 at the 21st Buenos Aires Independent Film Festival (BAFICI).

The author said the film was about the sexual awakening of a young Mexican in the city, where he may have experiences he hasn’t lived in his home province.

But it’s not the only film he hopes to present. On April 6, he will also premiere commercially in Chile “Cola de Mono,” which has been circulating in film festivals and which Fuguet says is the “cinematographic arm” of his book “VHS, unas memorias” (2017), which deals with the films that marked him.

“With ‘Cola de Mono’ I tried to make a film a bit like that of (director Steven) Spielberg but with sex, blood and set in Chile. It’s about a hellish night, a bad night. They are two brothers, a film coming out of the closet, at Christmas, with a mother, knives, blood and desire,” said the director of the films “Se Arrienda” and “Música Campesina.

“I was interested in making a film about repression in Chile (led by the dictator Augusto Pinochet), but not doing it literally but talking about another repression. Everyone remains in military or political repression, but there was also sexual, family, intellectual, religious repression,” he added.

MEMORY AS AN ENGINE
Fuguet, who makes constant references to American pop culture in his works, says he is interested in the subject of memory and would even like to write an autobiography because he finds it “fun to remember.

The book “VHS, Some Memories” is related to a previous text of his: “The Movies of my Life”. But he clarifies that the work published in 2003, although autobiographical, was about the films chosen by a fictional character and now presents those he likes.

“These are the true films of my life, which does not imply that the others are not important to me, but more are the films of the character Es un libro de memorias, no es ficción,” said the author, who traveled to Buenos Aires to participate in the second edition of the festival “LEER. Literature in the River”, which was held over the weekend under the slogan “Travellers”.

“My idea is that people can remember things of their own, build a bridge and, if they are not the same films, the same songs, the same city, the same streets, there are things in common. Because at the end of it, it’s about connecting,” he concluded.