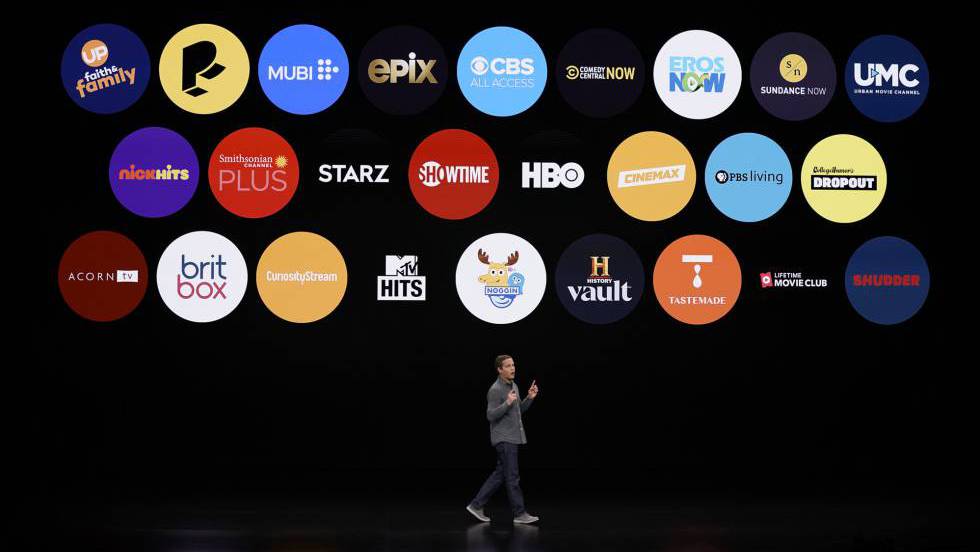 Apple hits movie and TV stars to stand up to Netflix

Apple has just taken the step from being a computer and phone company to a content and services company. It will produce and broadcast television series and become a financial institution with the new Apple Card. He announced it all this Monday at an event at the Steve Jobs Theater, in its headquarters in Cupertino (California), where the company’s executives have been tucked in by big Hollywood stars. “With everything we’ve presented, you’ll have seen how important services are to us,” said company president Tim Cook at the close of the event, which lasted nearly two hours. And he said, “We use the same approach with our services as with our devices: easy to use, attention to detail, private and secure.

Steven Spielberg, Oprah Winfrey J.J. Abrams, Jennifer Aniston, Steve Carrell and more well-known faces of cinema and television have starred in the announcement of Apple+, the great bet of the company to enter a market, that of the services of series and movies in streaming, that does not stop growing all over the world, and with which it will compete directly with Netflix.

The service will be integrated into the redesigned TV application of the brand’s devices, which will now group in a selected way through algorithms the purchases and rentals made within iTunes and the content offered through subscriptions to streaming services available to the user or their channels contracted cable TV.

Apple’s offer is similar to what operators such as Movistar or Vodafone propose, but with a different approach and taking advantage of its unique integration between hardware, software and services. The application has a sports section, which includes live scoreboards and notifications of important events of the user’s favorite teams, and children’s content supervised by Apple. “It’s not just another streaming service,” they say at Apple, but “the place where the best creators come together.

Several of them presented their projects at the Steve Jobs Theatre. “I’ve joined forces with Apple,” said Oprah Winfrey, who is working on two documentaries for Apple: one on workplace harassment and the other on mental health. “It’s a company that has reinvented how to communicate,” he added. Jennifer Aniston, Steve Carrell and Reese Whiterspoon will participate in a series called The Morning Show on women’s power in the world of work.

Subscriptions to streaming distribution services surpassed cable TV subscribers for the first time in 2018, according to the Cinematographic Association of America, reaching 613.3 million users. More and more households are “cutting the cable” and opting for one or more content platforms such as Netflix. The Apple TV app will be available in more than 100 countries, as well as on smart TV and Macs in the fall, and will use artificial intelligence to recommend to each user the series that interest them most, something that Netflix, HBO and Samsung already do to a greater or lesser extent.

A titanium card
More surprising was the announcement of its own credit card, which can be used through the Apple Pay application integrated in the iPhone or through a physical card made of titanium that customers can request. The service is integrated in the payments application and in iMessage to obtain information on finances, expenses made that are divided into categories or to consult with the virtual manager through a chat.

Apple Card uses automatic learning and Apple Maps to translate the cryptic names of the establishments where purchases are made, such as a restaurant. Charges are recognized and ranked to offer the user how much they spend on food, travel, or clothing, for example.

For each purchase made, the consumer will receive a 2% return on the amount, 3% if the purchase is made in an Apple Store, either a physical product or a digital payment.

To offer this service, which will soon be launched in the United States, Apple has partnered with the bank Goldman Sachs and Mastercard. The company has specified that no fee is required for its use and no penalty will be imposed for late payments. “We needed a bank that was willing to do something that had never been done, that’s why we partnered with Goldman Sachs. The card is titanium and it’s the prettiest card ever made,” said Jennifer Bailey, vice president of Apple Pay.

Monthly News
Through its News application, Apple will integrate a monthly subscription service that gives access to more than 300 magazines, including Vogue and National Geographic for $9.99 per month. The publications are fully integrated into the application and are designed exclusively for reading on the iPhone, iPad or Mac, including interactive content, video or animated infographics. The result is reminiscent of the Flipboard application.

Apple News+ will include access to paid content from the Wall Street Journal and the Los Angeles Times. Its launch is limited to the U.S. and Canada, but will reach Europe started by the U.K. this year, said Tim Cook, CEO of the company.

“I believe Apple+ will deliver great value to readers and newspapers,” Cook said, emphasizing the importance of selecting reliable, quality content through a team of human editors. At the same time, he stressed the opportunity to present a format like the magazine to a new generation through devices they use every day. It is now available in the United States and Canada. We don’t allow advertisers to track what you read,” said Roger Rosner, vice president of applications at Apple. “What you read in Apple News won’t haunt you on the web. “I love the feeling of being in a kiosk. We love them all, but we can only keep one or two. But what if we could have them all? Today we do just that. We bring magazines to Apple News,” Cook said.

Apple Arcade
Video games also had their place at the event with the introduction of Apple Arcade, a subscription service that allows users to play any of the more than 100 titles that are offered for unlimited output. The focus is on selecting high quality titles that don’t offer the classic free gaming experience that lures consumers into micropayments. The game can be played without requiring an Internet connection and the subscription, as with Apple News+, can be shared with family members without penalties.

Apple Arcade will be launched by the end of the year in more than 150 countries, although Apple has not detailed the monthly price. Apple Arcade games can be played on iPhone, iPad, Mac or TV. Apple sells its gaming subscription platform as a service that would never have come to market without the attention or care of a company like Apple. “Games that never would have been possible,” they say. Apple insists that there will be no tracking at Arcade.