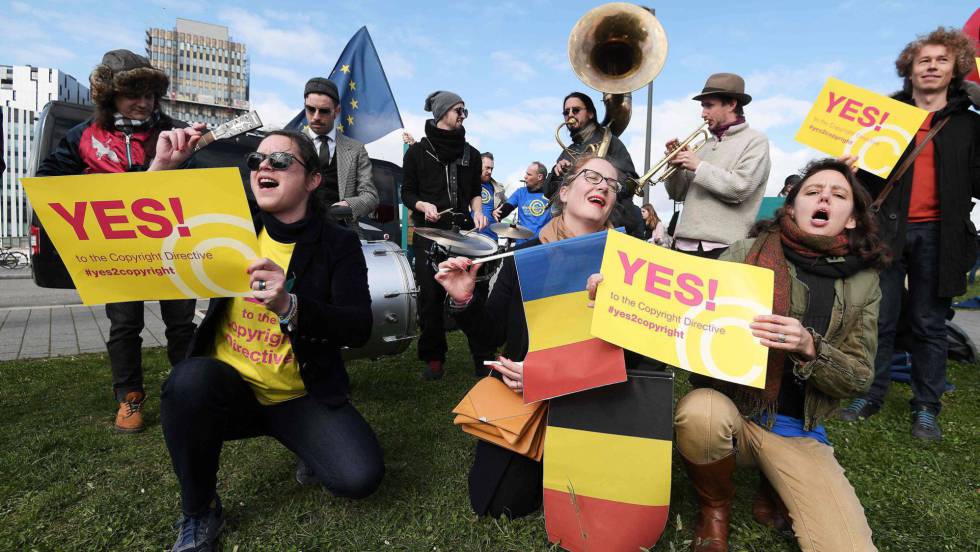 European copyright reform opens a new era on the Internet

The European Union’s copyright reform has reached its goal. After a two-and-a-half year race, dozens of obstacles, accidents and even a few standstills, the text has crossed the final line: it is already a directive, which states will have to implement and transpose into their laws. With 348 votes in favour, 274 against and 36 abstentions, the European Parliament in Strasbourg has thus closed the most controversial debate in its memory, according to several MEPs. Thousands of artists are celebrating their victory: platforms such as YouTube will have to obtain licences from creators or, in their absence, apply filters to detect in advance works that use protected material without permission; and press publishers will be able to demand agreements (and payments) from websites and news aggregators such as Google News for using their content. Critics, on the other hand, are preparing for the digital apocalypse: they maintain that the text will put an end to freedom on the Web, replaced by the reign of censorship. Time will tell who was right, but almost everyone agrees on one thing: a new era is opening up on the Internet.

After the denouement, the weapons are finally silenced. And so their noise became deafening, in a clash of colossal ideological and economic interests. Among the victims, in addition to the rigour and nuances, the streaming broadcast itself from the European Parliament: it fell right at the moment of knowing the result. For months, artists, politicians, activists, record companies, academics, Google and even the UN have launched prophecies, reports, demonstrations, threats and lies to condition the vote. Some insist that the reform seeks to protect creators and journalists and guarantee them a fair remuneration against companies that earn millions of users and euros for their works. Others shout that the directive will create a less democratic network. “We will have a censored Internet, the age of the Neolithic”, warns Simona Levi, of the Xnet collective, who describes today’s day as “black day”.

At the very least, the EU now has a more modern directive: a 2001 text was in force. The rest, on the other hand, is uncertain territory. The letter says that Article 17 obliges portals that store, organise and disseminate user content for commercial purposes (e.g. YouTube) to have a prior licence from the creators of those works. And Article 15 gives newspaper publishers the right to approve or not approve for-profit websites to share “significant fragments” of their publications. The legislator thus seeks to respond to the complaints of authors, indignant that their works reach more viewers and readers than ever before, but revenues are diverted to other pockets. Interpretations, however, differ greatly.

The initiative’s rapporteur, the popular German Axel Voss, and his front want portals like YouTube to negotiate with creators. If not, let them take responsibility – and be accountable – for what users share on their platform. Until now, they only had to react a posteriori, when they were told that they hosted unauthorized content. They were what are known as “safe havens”. Now, they will have to take a proactive role. Or at least demonstrate that they have made “every effort” to reach a pact, withdraw reported works and ensure that they are no longer available.

But how will they do it? Here is the key to the protest of Julia Reda, of the Pirate Party and leader of the anti-reform side. In the absence of a license, the portals will have to filter a priori. A manual sieve is utopian, hence the most realistic solution is an algorithm. Reda and the thousands of activists of the online campaign #SaveTheInternet underline that the machines already censor masterpieces of art for some nudity: what will happen to millions of contents? Moreover, they believe that few will be able to afford the cost of system size, hence they foresee a future digital oligopoly.

The text establishes exceptions for non-profit online encyclopedias, platforms such as Tinder or Dropbox, parodies, cartoons, quotations, reviews or critiques, which seems to protect memes and GIFs, and also includes complaint mechanisms for Internet users. At the same time, protection for startups: for companies that have been in business for less than three years and earn less than 10 million annually, the level of responsibility is reduced. However, opponents argue that in reality it will mean chaos. And that – in that they agree with Google – the greatest damage will be suffered by the user.

Its formulation makes it clear that links and single words are safe, as well as the user: the reform affects search engines, news aggregators or other websites that share relevant fragments of an article. The directive wants them to pay publishers, as they get ample benefit from newspaper and magazine articles. Google responds that Google News may withdraw from Europe, with the damage to the media that would result. After all, after a similar law was passed, the service has already left Spain. The search engine argues that it already helps newspapers by boosting traffic to them, and that it will fall by up to 45%. The directive also imposes that part of the profit be passed on to journalists, but critics point out that the power of publishers will turn it into wet paper.

Less controversial articles in the regulations (18, 19 and 20) increase protection for creators: they force portals to be more transparent, to inform artists, at least once a year, of their income and the use of their repertoire, and make it easier for them to leave if they are not satisfied with a platform. With the directive, moreover, the EU is also claiming to be the main policeman of the Internet giants. It has asked them to account for alleged tax fraud, restrictions on competition or privacy. And now for copyright.

The Member States will have two years in which to transpose the directive into national law. But some experts point to the start of a new battle: they say that the text is so ambiguous that each country will transpose it into national laws as it sees fit. “We look forward to working with policy makers, publishers, creators and right holders as EU Member States move forward with the implementation of these new rules,” they write from Google. For a front that closes, 27 may open.