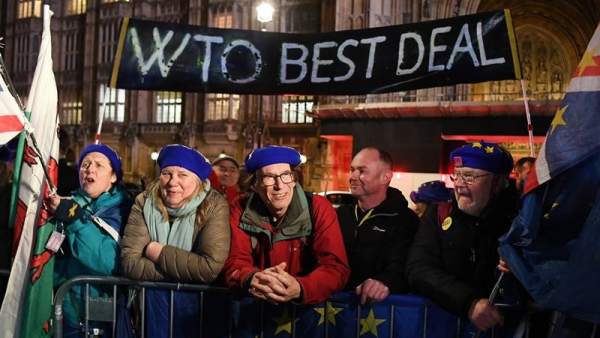 Is the brexit approaching a dead end? What can happen now

The brexit process seems to be reaching a dead end. The British Parliament has twice rejected the terms of divorce agreed with Brussels, but also refuses to leave the European Union without an agreement. On Wednesday, the House of Commons passed an amendment declaring itself against a brexit without an agreement, a first step towards overcoming the deadlock in the divorce proceedings as a result of MEPs’ repeated refusal to accept the text negotiated by the parties. +

May, who took the floor as soon as the round of voting ended, welcomed the fact that Parliament had declared with a “clear majority” that it did not want a chaotic brexit, but, at the same time, recalled that it is a mere declaration, without binding Community law, according to which the United Kingdom will leave the EU on 29 March – with or without agreement – unless it asks to postpone the split. So, with two weeks to go before that deadline, MEPs will vote on Thursday if they are in favour of requesting an extension from the remaining EU countries, which should approve it unanimously.

May’s motion foresees London asking for a three-month extension if a departure treaty can be approved by 20 March. If Parliament has not ratified a pact by then, the government warns that the extension could be longer and force the UK to participate in the next European elections. These are some of the keys that will condition the future of the brexit: Is a way out without an agreement ruled out? Although MEPs have spoken out against a non-negotiated break, British law and the Treaty of Lisbon continue to mark the 29th as the date of departure, so the separation will be carried out on time if an extension has not been approved or if a pact has been ratified. Nor does an extension completely eliminate the risk of abrupt brexit, a scenario that according to the Bank of England could trigger a recession in the UK. If London doesn’t ratify exit terms in the coming months, it will face the same dilemma again.

Is the brexit deal a dead letter? The pact sealed in November by London and Brussels has been rejected in Parliament by a large majority on two occasions, but there is a possibility that Prime Minister Theresa May will try again to ratify it for the third time. The motion to be voted on Thursday sets 20 March, one day before the next EU summit, as the deadline for approving the text. May has warned that the UK could be forced to ask Brussels for a long extension if it does not back a pact. The head of government hopes that this prospect will change the minds of some of the Eurosceptic MEPs who have voted against the agreement so far. How long can an extension last? May offers to ask for a “short” extension, until 30 June, if an agreement is ratified. That limit is two days before the new European Parliament is set up, which would allow the United Kingdom not to take part in the EU elections scheduled for May. These elections would erode the image of the Government, which is committed to complying with the outcome of the 2016 referendum.

They would also pose a technical problem for the EU, which has already divided some of the British seats among other countries. The motion to be voted on this Thursday is amendable, so the chamber groups could take control and modify the terms of the text presented by the Executive. If May arrives at next week’s European summit without a ratified pact under her arm, EU leaders will ask her to detail a roadmap for the months that an eventual extension would last. The remaining 27 EU countries must approve the extension unanimously, so they would be in a position to impose conditions on the UK and determine the length of that period. Is a second referendum possible? The Labour Party officially defends a new plebiscite, although it has not yet taken steps in that direction.

For this proposal to succeed, some conservative MPs must support it and Labour leader Jeremy Corbyn should quell a possible rebellion by some of his MPs, elected by brexit constituencies, who have so far rejected a consultation. May has suggested the possibility of resubmitting his agreement to a vote, subjecting its ratification to a new referendum. That option, he warned, would entail the risk that the brexit would not materialize. Can early elections be held? The UK is at a crossroads, so most of the candidates to succeed May at the head of government would probably prefer to take over once the brexit has materialised, when they will be able to lead negotiations on the future trade relationship.

Published in ECONOMICS and POLITICS