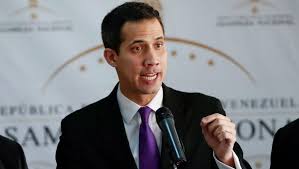 Juan Guaidó denounces the arrest of his head of office and demands his immediate release.

The opposition leader Juan Guaidó, recognized as interim president of Venezuela by more than fifty countries, denounced Thursday the arrest of his head of office, Roberto Marrero, and demanded his immediate release. In his official Twitter account, the president of Parliament and president in charge wrote: “Roberto Marrero, head of my office, was kidnapped. He denounced loudly that two rifles and a grenade were planted on him, he told his neighbor Sergio Vergara. The opposition leader specified that “the procedure began at 2 a.m.” approximately. “His whereabouts are unknown. He must be released immediately,” Guaidó demanded.

While the leader of the opposition in Venezuela denounces this arrest, the country continues to await the new cabinet of President Nicolás Maduro, which is expected from the beginning of the week, and the next steps of Guaidó himself, as head of Parliament. For his part, Congressman Sergio Vergara said that Roberto Marrero shouted that he had been “planted” two rifles and a grenade in the house while they were taking him away in detention early Thursday morning.

Vergara, whose house was raided Thursday in the operation of the Bolivarian Intelligence Service (SEBIN) that arrested Roberto Marrero, who lives a few meters from his home, said they have “some knowledge” that the arrest warrant did not come from the high government. “Before leaving, Roberto Marrero shouted at me, two rifles and a grenade were put in what is a clear ‘sowing’,” Vergara told reporters. He asserted that some 50 members of SEBIN participated in the operation, and that one of them told him that these actions were being taken because the opposition is calling for a military intervention by Venezuela. U.S.: “There will be consequences,” U.S. Special Envoy for Venezuela Elliott Abrams warned Thursday that there will be “consequences” against the five Venezuelan officials directly involved in Roberto Marrero’s detention on Thursday.

In a telephone press conference, Abrams named the five individuals who, according to Washington, have participated in that arrest: Judge Carol Padilla and prosecutors Farid Mora Salcedo and Dinora Bustamante, as well as agents of the Bolivarian National Intelligence Service (Sebin), Dani Contreras and Angel Flores. In Spanish and addressing those individuals, Abrams said: “I think you need to know that we know you, we know who are the ones who have been involved in these criminal acts, we know their names and the effects are going to be for the regime and also for those individuals. The Colombian government has also denounced the arrest and asked for his release.

The Colombian Foreign Minister, Carlos Holmes Trujillo, rejected this Thursday the detention in Caracas of the head of office of the interim president of Venezuela and asked for “respect” for freedom. “The Colombian government rejects the siege by SEBIN officials of the houses of Congressman Sergio Vergara and the head of President Juan Guaidó’s office, Roberto Marrero,” Trujillo said through his Twitter account. In his message, the foreign minister also “called on the international democratic community to demand respect for Marrero’s freedom, life and integrity.