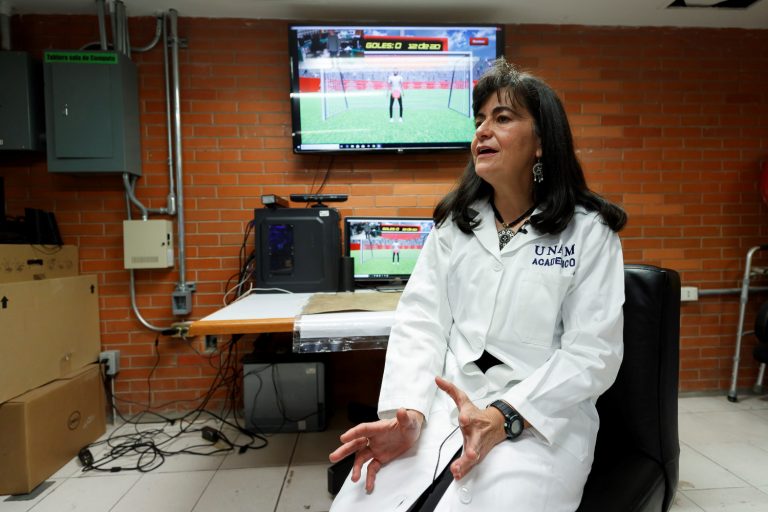 It is in one of the laboratories of the National Autonomous University of Mexico (UNAM) where these videogames are created with a nostalgic retro aesthetic reminiscent of Super Mario Bros.

This time, the traditional ‘joystick’ gives way to sensors that capture the movement of the hands and arms, an entertaining exercise of repetition that ends up restoring the connectivity of the neurons.

During Efe’s visit to the Interactive Applications Research and Development Laboratory for Neurorehabilitation, some screens show the different games: one tries to make sandwiches, another is the classic platform game and the last one moves the patient to a football field.

Ana María Escalante, coordinator of the laboratory, tells Efe that the idea is “to use position sensors to track people’s movements and simulate the rehabilitation therapies that therapists normally use to treat patients with neurological damage”.

However, this is a complementary treatment, which brings novelties to be more fun.

Therefore, there is still no conclusive evidence to say whether it enhances normal therapy. But for now, it’s much more fun.

Although the idea of the laboratory is to try to address different neurological conditions, for now they are only focused on one, Cerebral Vascular Disease (CVS).

BSS affects people’s mobility, usually as a result of a blockage in blood flow that affects one of the two hemispheres of the brain.

Like a mirror, when the left hemisphere is damaged, the consequences are reflected in the right hemisphere, and vice versa.

According to Escalante, for practical purposes, it is the body that feels this cerebral blockade manifesting a “hemiparesis, that is to say, half the side of the body is very limited in its sensibility and motricity”.

However, in the face of this evil, the brain has its own tricks to succeed, and in this case its strategy is called neuronal plasticity.

This means that “neurons neighbouring dead neurons begin to try to establish connections”.

It is at this moment when the “adequate and precise movements” must be made (such as those that promote this type of video game) so that neuronal mobility recovers and the patient recovers.

In this recovery, time is of the essence and this is where video games play an essential role; once the risk phase has passed, the patient can install the video game at home.

“The idea of video games is that it is something that the patient could take home and with this we would be addressing two very important problems in recovery, which are opportunity and frequency,” explained the scientist.

A phase of rehabilitation is usually tedious, is accompanied by mood swings and is not easy to cope with.

Against all that, the scientists of the UNAM entrust the mission to the games “Sandwich Mania”, “Charlie’s Scape” (Super Mario Bros style) and “Penal Madness”.

In the first of them, the user, from a sensor called Leap Motion, has to move the finger of the hand that is indicated on screen in order to put one ingredient or another inside the sandwich.

“Charlie’s Scape” is also based on the movement of the hands, but this time they have to open and close so that the intrepid Charlie – protagonist of the game – advances and jumps.

Here the user becomes a football goalkeeper and moves his entire arms in the direction indicated on the screen to stop balls seeking to enter the goal.

But not only the user makes use of these games, the figure of the doctor remains essential when monitoring from his interface therapist the progress of the patient.

According to Escalante, although it is still a project in development, here the video game is a medical prescription, one more that doctors now have for patients to improve.