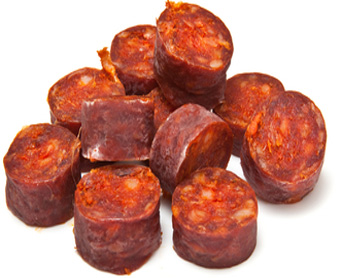 The ‘Periódico de Extremadura’ echoes the popularity of the famous Spanish sausage in the British market. Chorizo has made its place in UK gastronomy, as well as in the recipes of the most famous chefs -chefs of the stature of Jamie Oliver or Nigella Lawson-, who increasingly add it to a greater number of dishes.

According to data from ICEX Spain Exports and Investments, sales of chorizo and other cured meat products abroad reached 314.9 million euros in 2012, representing an increase of 29% over the previous year. Exports to the United Kingdom, meanwhile, have increased by 17%, reaching 7,155 tonnes of product and making this country the second importer behind France.

The most important retail and restaurant chains in this country have also surrendered to Spanish sausage, including dishes made with this ingredient and expanding the range of this type of products. The supermarket chain Waitrose, for example, has doubled sales of chorizo in one year.

For his part, James Robinson, head of the commercial department of Brindisa, a company dedicated to the marketing of Spanish products, points out that “it is a fashion in continuous ascent and, at the moment, sales are very high, especially those of sausages for stewing, although curing is also reaching wider markets”.