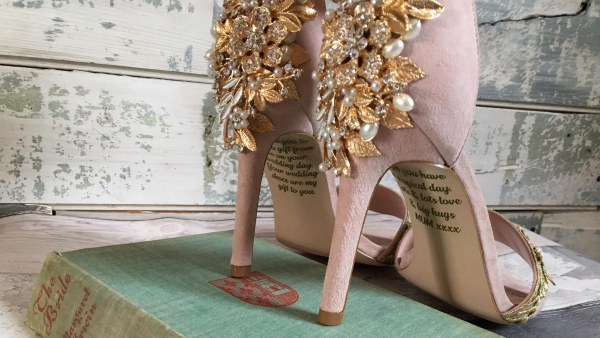 Emma Letts, a 38-year-old woman from Leicestershire, UK, got engaged to her boyfriend Richard in 2016, but a month later she suffered a major setback: her mother was diagnosed with terminal lung cancer.

Emma’s mother ended up dying in 2017, but she wanted to give her daughter a gift before she died by paying for the shoes she will wear to her wedding and leaving a message on them: “I wanted you to have a gift from me on your wedding day. Your wedding shoes are my gift. I hope you have a magical day. I send you a lot of love and a big hug. Mom.

Emma, who knew nothing about the gift, received the shoes a week ago, and when she realized that the inscribed message was from her mother, she began to cry heartbrokenly: “I pulled out a shoe and saw part of the message, but I didn’t know who it was from. I was totally devastated. I couldn’t breathe or talk,” the woman told BBC.

In addition, she explained that her mother had been writing letters to different relatives of hers, but “I didn’t receive a letter, she didn’t have time, so this is special for me. Amanda Weise, head of Lace and Love’s online store, also wanted to express how special it had been for them to be a part of this detail, and told how the gift was forged.

It was a few weeks after Emma placed the first order: “She told me that she had cancer and that she would not be present at Emma’s wedding. She told me in the first message she sent me that she wanted to pay for the shoes.

I replied that Emma had already paid half, and she asked me, ‘Can I make the full payment and then give her back the money when she gets the shoes? “I think Emma was hoping she could make it to the wedding, but from the message she wrote, I think her mother knew the wedding would be after her death. “I hope you console him that day. It will be like walking down the aisle with your mom,” Weise said.

Published in BREAKING NEWS and LEWISHAM