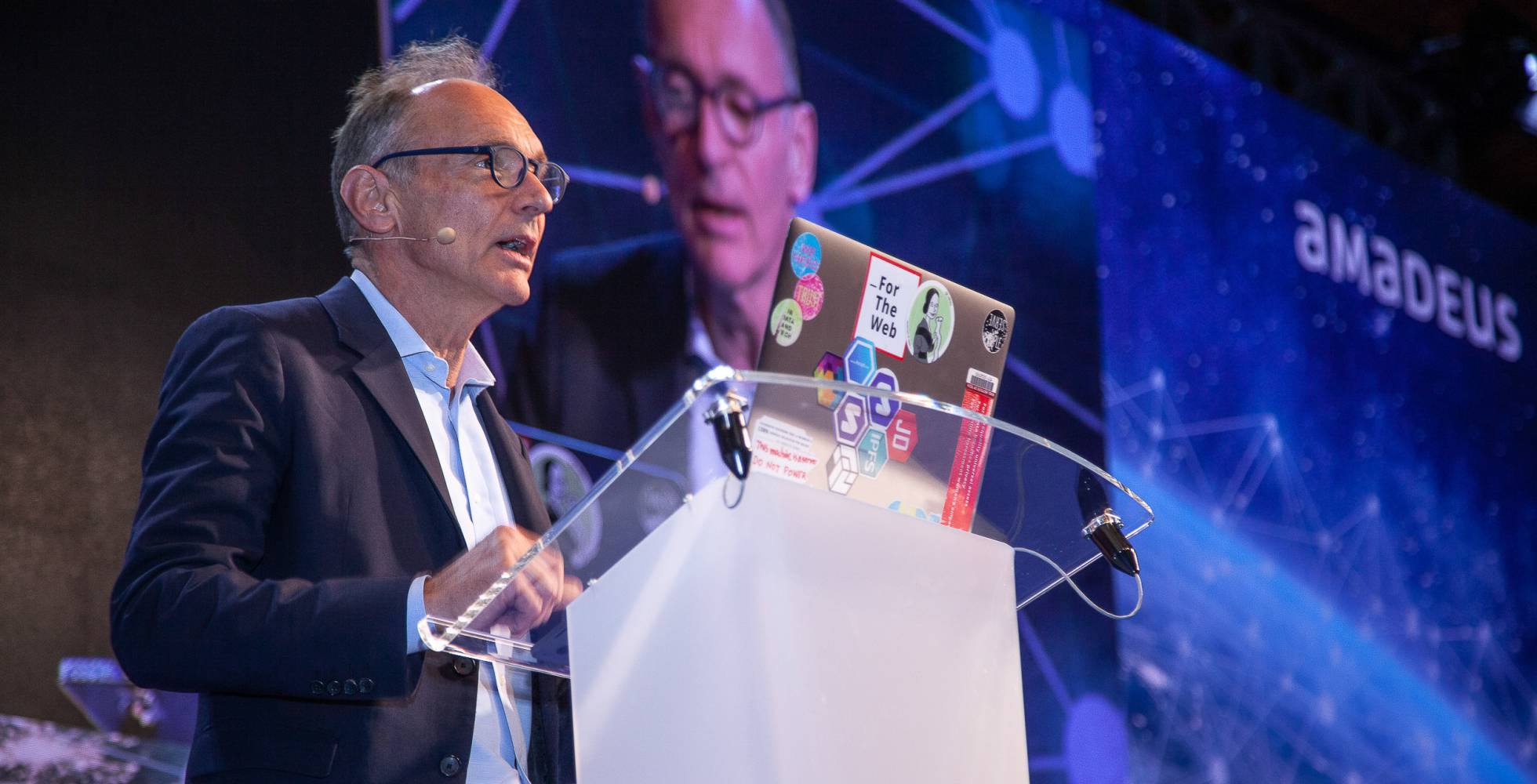 Tim Berners-Lee: “Siri and Alexa don’t work for me, but for their companies.”

At the age of 33, Tim Berners-Lee invented the World Wide Web. Now, 30 years later, he sees that the Internet we have was not the one he had planned to create. And he wants to help rectify.

Berners-Lee calls it the “decentralization” of the Internet. “The spirit of the early years was that my blog and the links I chose led to better readings. Now what we read is determined by the algorithm of a social network. There has been a great consolidation, which is bad for innovation,” Berners-Lee said at the inaugural conference of the first edition of T3CH, the travel technology event organized by Amadeus in Madrid.

With the cover of his computer full of stickers, Berners-Lee explained how today the priority of technology is already its users: “Siri and Alexa do not work for me, but for their companies,” he said. “In an ad-financed model, the goal is to distract the user from buying something.

Berners-Lee’s complaint is against the foundation of today’s web, based on large companies that use their users’ data to expand and prosper their business. “That’s the original sin,” Berners-Lee believes, although it was Trump’s and Brexit’s choices that led him to think that everything had to change.

Berners-Lee has cited as an example of the disaster the young Macedonians who created false news about the U.S. elections in 2016 to earn money with ads on their pages. The craziest phrases – such as “Hillary wants Trump to win,” according to Berners-Lee – were the ones that generated the most traffic and therefore the most money. The system had terrible incentives. No matter how, only the magnitude of the traffic mattered: “False things made more money than real things. Google’s search engine told them to do more fake news,” Berners-Lee said. “The system is very bad,” he concluded.

For some years now, Berners-Lee has been working in Boston with MIT (Massachusetts Institute for Technology) for an alternative. His name is Solid and in 2018 he founded a company, Inrupt, to achieve his goals. Solid comes from “SOcial LInked Data” and is intended to change incentives for developers and service providers. The data will always be in the hands of the user and only he or she will decide with whom they share it: photos, location, email, shopping, whatever.

This idea has several problems compared to 1989. Now the web already exists and has its model, which gives salaries and benefits to millions of people. There are even countries that have based national security models on the web as it is today.

For Berners-Lee, that only serves to manipulate: “All the data you generate are from that company and serve to manipulate you,” he said. The manipulation can be commercial or political.

In addition to the reluctance of companies and governments, the change of model proposed by Berners-Lee has two other monumental challenges: one, the user should be active when managing his data, for example in his Dropbox, and two, the new apps of the “Solidworld”, as Berners-Lee repeated, must be paid. This is how it has to be if “the app really works in my name”, and not in the name of another company. “I will pay for the news so that there are journalists who work for me and don’t fool me, so that nobody wants to distract me while I’m working and so that whoever calculates my taxes does so without abusing my data,” he said.

First-rate citizens
“The computer must work for me.” Berners-Lee’s lament is based on the apparent growing sense that our devices work both to help us and to collect our personal information on behalf of other companies. It is a pact that many are willing to accept for the time being. Berners-Lee has referred to the millennials as that generation for whom privacy seems to be less important: “The elders remember what the early years of the web were like, but the millennials should be able to imagine a world where they are first-class citizens, where they rule over their data,” he said.

Despite his technical background and confidence in technology, Berners-Lee now expects people to ask for and encourage change, not technology: “The systems we design will respect users,” he said.

In a small metaphor of how citizens feel about their privacy today, Berners-Lee recalled the cookie box that we must approve in Europe to enter a new website: “You must not have to give ok with the feeling that it is a radioactive box,” he said.

“Our aim is not to turn privacy upside down, but to get it on its feet as it should be,” he concluded.